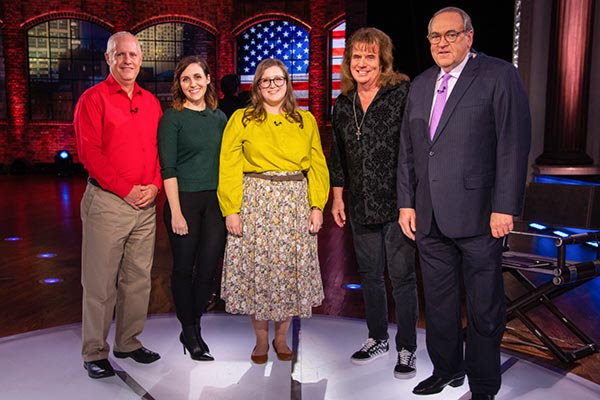 NASHVILLE, Tenn. – Country music entertainer Tim Atwood appeared on the television show Huckabee over the weekend to perform his new single, “You First” in honor of all Gold Star Families–families who have lost a loved one while in service to this country. During the show, Atwood made a special presentation of a memorial bracelet to the family of fallen Air Force hero, Captain William D. Grimm. What makes this bracelet so special is the fact that, unbeknownst to the family, this bracelet was worn without fail, every day for the past 30 years.

To watch Tim Atwood’s performance of “You First” visit HERE.

After a concert in 2016, Air Force veteran Stacy Britton was so moved by Atwood’s performance of the patriotic anthem “I’ll Stand Up And Say So” that she removed Grimm’s memorial bracelet from her wrist and gave it to him–explaining that she had worn it daily for 26 years. She felt in her heart that it was time for Atwood to carry the torch for this American hero. Atwood promised Britton that he would honor Grimm’s memory and legacy during every show he performed. A commitment he has kept for the past four years.

In all that time Atwood never removed the bracelet from his wrist. This bracelet represented a human life with dreams and goals, and he wanted to know more about this man who had become such a big part of his own life. After much research, Tim learned that Captain Grimm was killed in action during the downing of gunship Spirit 03 in which he and thirteen of his fellow airmen died saving the lives of a group of U.S Marines who needed “air to land” cover to survive during the Gulf War. Upon discovering that Captain Grimm was an alumnus of Kansas State University, a phone call was placed, and the office of KSU’s Veteran Affairs connected Atwood with the Grimm family. The Huckabee show stepped in and saw to it that Atwood and the Grimm family could meet in person.

“I want to thank everyone with Huckabee who brought us together to honor William’s memory and service. I never met Captain Grimm. He died in combat at the age of 28 leaving behind two small daughters with no memories of their dad; however, in many ways, I do know him. I know his heart. I know he was a man of valor who loved our country,” Atwood expresses. “Having this bracelet around my wrist has reminded me to be a better servant to our country and all it stands for. This wasn’t about left or right politics. It was about honoring those who pay the ultimate sacrifice and their families. We all bleed red, and Gov. Huckabee and his staff understand that. It was a privilege to honor the Grimm family on this show.”

With the thirtieth anniversary of the downing of Spirit 03 fast approaching on January 31, 2021, Atwood, in an emotional moment, presented the family with Captain Grimm’s memorial bracelet. “This bracelet and William’s memory have traveled across the globe. It was time for this bracelet to come home–where it belongs,” Atwood said.

“It has been humbling to think of all the people that have been impacted by this story,” says brother, James Grimm. “Until I heard Tim’s experience of receiving the bracelet with my brother’s name, I didn’t think others knew of or thought about, William. It is my prayer that other families who have lost loved ones serving our country find comfort knowing their loved one’s stories and memories are being kept alive by someone they don’t even know and that it is having a positive impact on their lives.”

For his perseverance and dedication as a civilian honoring our U.S. military and our fallen heroes, Governor Huckabee surprised Atwood with a Kansas State University Presidential Challenge Coin issued by KSU President Richard B. Myers.

“Being a part of this bracelet’s journey was such an honor,” Tim confides. I feel like the Grimm family is now part of my family. The Grimm’s are discussing now how they want to share the bracelet. It looks like the entire family will take turns wearing Williams’ bracelet–his father, brothers, sisters, and daughters. That makes me feel good.”

Tune-in for free on TBN or live stream on TBN.tv. TBN is also available on iOS, Android, AppleTV, Amazon fireTV, Roku or download the TBN app on Google Play or the iOS App Store. For more information, visit tbn.org.

About Tim Atwood:
Tim Atwood is an award-winning entertainer honored in our nation’s Congressional Record for his many contributions to country music as a performer and a studio musician. Winner of the 2020 Telly Award for Social Media Event of the Year, Tim is a 38 year veteran of the Grand Ole Opry stage and a member of the world-famous Wheeling Jamboree. He is proud to include memberships into the ALM Musician’s Hall of Fame, along with an artist membership into the North American Country Music Hall of Fame, to his list of accolades. After a recent nod by the Reunion of Professional Entertainers for Songwriter of the Year, Tim’s song “That’s How I Roll” was recorded as a collaborative effort by Jeannie Seely, Lorrie Morgan, and Vince Gill. Tim’s TV appearances include the Hallmark channel’s Home & Family show, Huckabee, Larry’s Country Diner, The Dailey & Vincent Show, Country’s Family Reunion, Opry Live, Newsmax, and Hee Haw. Voted “Fan Favorite” by the Genuine Country Music Association, Tim’s recent live stream performances have been viewed by over 600,000 country music fans.